Restoring the abandoned village (Part I)

Some weeks have passed and a lot of progress has been made. Several members of our group came by to see and decide for themselves if this beautiful but isolated village can be their home. During one such visits, an owner came along and called the mayor to send in two guys with brush cutters.

A few days later, as I was cutting trails to one of the unreachable properties, they actually came. So in a couple of hours the whole village got a haircut. It’s still very much overgrown but now the main trails offer easy access. When we remove rocks and logs, it will even be possible to reach the lower part by car.

The biggest discovery is a path down to the lowest part of the village, along which I found four more ruins. From what I have been told, this is the oldest part and was inhabited until its residents built better houses further up. Later on they used it for storage, to dry chestnuts, and as stables. Nowadays whole trees grow in some of the ruins, which makes it impossible to see them by satellite. Nevertheless, any ruin counts as a residence. This means we can house more people in accordance with the laws of Spain.

The lower part of the village is currently inhabited by wild boars. I’m not sure how to vacate them. I’m fine with shooting a few but have no idea about processing their meat. It’s probably a good idea to have a pair of big dogs so they keep their distance. Flies love pig poo, and on a bad day there are flies everywhere.

One strategy to combat flies and mosquitoes is having enough dragonflies. These need a sizable pond for their larvae to develop into adults. For that we need to have a dam in the creek, and there already exists such a dam. Currently it doesn’t contain much water for it is badly sealed and not maintained. However with a little effort it can be restored!

Annoying as the flies are, building a pond is not top of the list. There are several wells in the village and there’s a pipe from a communal water system somewhere along the main road. Restoring the water supply has priority after cleaning.

For my family I’ve found a rental closer by, which was not easy. On the one hand, there are many empty houses and holiday homes anywhere you go. On the other, there’s so little demand for rentals that people don’t even bother listing their properties. Perhaps some government regulation makes it tedious too, or protects bad tenants more than good owners.

We are very happy with the new place as it makes life easier with the kids, and it helps to build a network for everything we need in the near future. The BX is also on the road again!

Soon we will release some videos on our Youtube channel, which will have links to a Patreon account and crypto donations. That way we can raise funds for the various projects. Feel free to support our work! 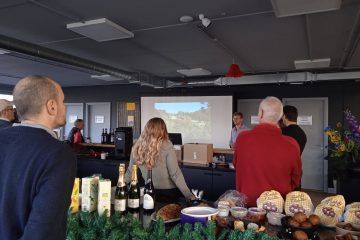